Following World War 3, the inhabitants of America struggled with sickness, death and a smashed economy.

Theft, violence and starvation were at an all time high. The rich sought to correct this by barricading themselves in their ivory towers and making it illegal to be poor.

The prison system collapsed under the weight of so many residents. The violent, the people with no hope, the poor, flooded back onto the streets. The rich called them hobos, because that’s what they were. Hobos.

Nearly starving to death themselves, the ruling class devised a plan.

Using the top scientists in the country to build the World’s largest Meat Grinder, the rich set about rounding up all the hobos to grind up for food. Thinking this would seem barbaric, they decided to turn it into a spectator sport and allow a hobo selected via lottery the opportunity to move up to the ivory towers.

Armed with a portal gun, the contestant would battle through hordes of hobos, teleporting them over the World’s largest Meat Grinder for the entertainment of the masses. If you could live long enough, all of your dreams of not being a hobo would come true. If not, then you were just food.

You just won the lottery.

The future is back! I hope you love arcade games about dystopian worlds in the late 90’s, because this this what you’re getting in my game. Welcome to Bummed OUT! A twin stick shooter where you have to teleport hobos above the World’s largest Meat Grinder in order to feed the starving rich folk. Prepare to rethink the concept of “the greater good” and see if you can find the hidden ending.

Fixed a bug that was causing the game to soft lock when taking damage from a shopping cart hobo at a certain time. 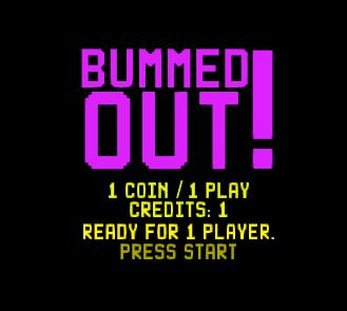